What does “closed economy” mean in recycling?

In this post we explore how catalytic converter recycling uses the closed economy model.

Closed economy recycling has gained rapid popularity over the past decade and sustainability is one of the hottest topics in today’s world.

Many of us know what sustainability is, however not that many of us are aware of what a “closed economy” is.

In this article we will briefly go over what the main differences between closed and linear economies are; the benefits of closed economy recycling to the catalytic converter industry; and the processes involved in making a closed economy possible.

What is a Linear economy?

The most common way in which we find companies operating is based on a linear economy model.

Linear economy is defined as a line where production uses raw materials for product design and construction.

These products are being consumed and disposed of by consumers and other parties.

During this stage most of the raw materials are being wasted and very little is saved.

Eventually, the process starts again from the beginning with large amounts of energy required to extract and gain new raw materials.

The industry extracts raw materials, transforms them into consumer goods using work and energy, and distributes the products to the consumer. Once the consumer has used the product they dispose of them which creates “waste”.

In the linear production and consumption model, the life of each product essentially has five stages: extraction, production, distribution, consumption and disposal.

Each stage of a product’s life requires raw materials and energy, and generates waste and polluting emissions.

It has been recognised worldwide that this approach to resources, together with constant population growth, increased consumption and often inefficient use of resources, is no longer sustainable. “If this trend continues at the current rate, by 2050 we will need two planets” (Chimet, 2020).

So if our standard method of production is no longer sustainable, what can we do?

The answer lies in the transition from a linear economy to a closed loop economy.

What is a closed loop economy?

A closed-loop economy is commonly referred to as the “circular economy”.

Here is one of the most popular statements that defines the circular economy:

“Nothing is created, nothing is destroyed, everything is recovered.”

A closed-loop economy is a circular economic model in which aims to generate zero waste through circling the materials through as many times as possible. Everything is shared, repaired, reused, or recycled.

What would traditionally be considered “waste” is turned into a valuable resource for the creation of something new. After consumption, the materials are collected and reprocessed into raw materials that are ready for manufacturing. 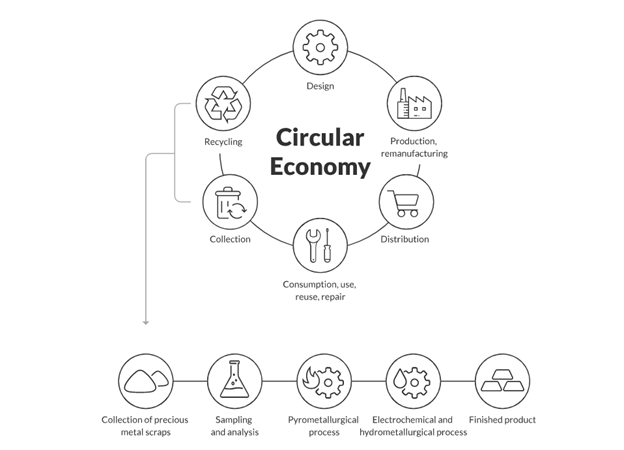 We aim to recover and refine precious metals from commercial and industrial processing waste and unused scrap.

We assist in the recycling process by handling the first and secondary stages of recovery, making it easier to recycle used catalytic converters in the production of the new catalysts.

What does that mean for recycling catalytic converters?

Let’s hear what industry experts have to say about why we should aim to do an even better job at recycling and what is going to happen with demand for Platinum group metals.

The demand of PGM (Platinum Group Metals) will increase in the years ahead according to Johnson Matthey due to:

Going forward we expect the demand for platinum group metals will increase, thus optimising the recycling process will play a key role in attempting to minimise the energy consumption allocated to mining activities.

Out of 63 metals investigated and compared on a per kilogram basis, a report by Nuss and Eckelman (2014) showed – yet again – the importance of efficient recycling. The environmental costs can be reduced by 20 times compared to extraction.

The implications of not recycling scrap catalytic converters.

What happens if we do not recycle?

There is huge waste production.

About 2 tons of rock are dug up to produce a typical 18k (5g) gold wedding ring.

About 5% of the energy we consume worldwide is used to grind rocks. That’s an enormous amount of energy.

For example, platinum ore has to be extracted from deep tunnels, requiring lots of digging energy, and a large amount of ore is needed for a significant amount of end-product platinum (1 ton of ore for 1 ounce of platinum).

Once extracted, platinum ore must be treated with chemicals to achieve the metal.

Not only is this polluting the environment, but it’s also harmful for the mine workers who are commonly underpaid and forced to work in harsh conditions.

The advantages of recycling.

On a micro-level, the methodical transition to a closed-loop supply chain could provide your business with substantial long-term savings, less reliance on external suppliers, a positive public perception, and increased customer loyalty.

On a macro level, the closed-loop economic model can increase jobs and innovation, the security of raw material supply, consumer savings, and reduce damaging pressures on the environment.

Furthermore, and very important to our customers, you get paid for selling your scrap catalytic converters to us or othe recycling companies.

If you are interested in how to earn money by selling catalytic converters, feel free to contact us.

Due to their valuable components, it is common for catalytic converters to be recycled for money, inadvertently helping the environment.

Any cookies that may not be particularly necessary for the website to function and is used specifically to collect user personal data via analytics, ads, other embedded contents are termed as non-necessary cookies. It is mandatory to procure user consent prior to running these cookies on your website.